LEARN YOUR BRAND PERSONALITY
and how to bring together all your talents under one brand. Start by downloading your Brand Personality Filter workbook by entering your name and email address. Then, enjoy our articles each week! 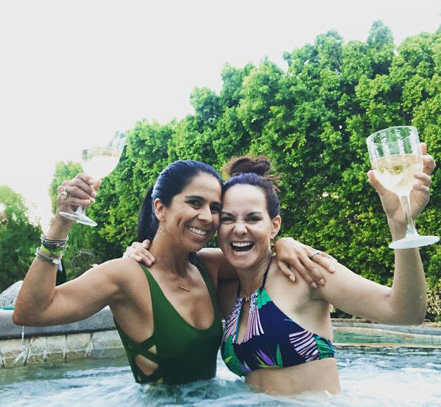 Months back, I shared about the post-it note that held the names of the people (friends and family members). I wanted to step up my connection/’more QUALITY time spent’ game with.

My thought was that this small piece of paper with approximately ten names on it would yield big gain; a powerful and joyous time coming off of four years of tragic loss and it did — and continues to.

The time spent inside this experiment or adventure has given me what or who I actually felt like I had lost with each death ~ a bit of myself.

I never really lost *them* per say…I didn’t lose my brother and mother, I simply lost my ability to relate or communicate with them in the only way I had learned or known for so many years.

That ability to relate or connect in the way I always had was what contributed to feelings of “loss”, but the truth is that they…they’ve always been here, albeit in a new form.

I’ve had the opportunity now to learn to successfully connect to this new form over the last few years (both their names are on that post-it, too.

This last year plus, on what I’ve called my Friendship Experiment (see livestream replay link in the p.s) and after connecting deeper and more consistently with more than half the names on that list in more meaningful ways (especially since the losses) has shown me what research has told us for a long time:

Good friends / a community who is actively engaging and supporting one another = longer life.

I may not know in this moment if my life will be long in its number of years, but I do know that my days have felt as wide and deep (as the ocean) since I recommitted to a new level of closeness with those still living.

Treating them, maybe, as I would treat the very beloveds I lost (treating strangers throughout this time as if they, too, were the very ones I lost).

Inc. Magazine recently shared a new study of 300,000 people and said the one secret, as they called it (not sure it’s so much a secret), to a healthier and longer life, goes back to the strength of the relationships we keep.

But to keep them, of course, what’s inferred is that we get to nurture them more consistently by figuring out creative ways to be there (be there for *ourselves* through being there for others — and they also for us), no matter how busy life gets.

We have the ability to live long in so far as the number of years goes as well as draw out each of our days by feeding the connections that surround us.

The gorgeous woman in this photo is my cousin. She’s also my sister, my friend, a confidante and someone who, just three years before my brother Dino passed, lost her own beloved sister in an accident, too. I can also add a compassionate listener to the list.

A few weeks ago she saw her eldest off to college. She was feeling the rush of emotion, so I rushed to her…

For one day and night, two weeks in a row after he left, we were together at her home in the desert. Simple times and the best of times (during the second weekly visit ~ bubbly).

She just left my house late this morning after being together yet again.

And that’s what I’m after ~ the yet agains; being with those I care about yet again in the most quality (simplest) and meaningful of ways.

Are you after the yet agains with your beloveds also? Who would your post-it have on it?

Enjoy your business, enjoy your life!